PWC Barangaroo Tower 1, NSW: ‘The use of FireMaster Concertina and Vertical Fire Curtains created a fire protection solution which ensured the Architectural design was not compromised’ – Mike Harrington

The design of this building included areas that did not comply with the DTS provisions of the BCA. A performance-based fire safety engineering approach developed alternative solutions which included  vertical fire curtains on Levels 14-17, around the stair voids and through the centre of the office space on Level 15, in lieu of fire walls achieving an FRL of not less than -/120/120. To ensure safe evacuation of people in fire mode, these areas were required to be fire separated from the remainder of the fire compartment.

The stair voids on each level had been architecturally designed with multi shape glass balustrades surrounding the stair/landing on Levels 15 and 16. On Level 14, the steel stair construction transformed into a timber stair and landing before rejoining the floor level. If a Fire curtain was the solution here, it would need to be custom made on each floor ensuring that it surrounded each staircase and landing taking into account the different shapes including varying amounts of corners.

To facilitate occupant evacuation, the FireMaster Concertina curtains would need to drop to a height of 2 metres and hold at this position for 30 seconds before completely deploying in the closed position within 60 seconds from receipt of the general fire alarm. To avoid occupants getting trapped, clearly marked push buttons would have to be provided on the inside of the fire curtains with signage on each curtain to notify the occupant of the location.

To meet the requirements for occupant escape, once activated, the FireMaster Concertina Curtains deploy to 2,000mm AFFL & hold for 30 seconds (SDD – Split Drop Delay). After the 30 second hold has expired, the curtain will continue to deploy to FFL.

There are also emergency retract buttons which can be pressed in a fire event to lift the vertical curtains to 2,000mm AFFL & hold for 20 seconds before deploying again. This was a function that Greene Fire did not advocate. There are a number of large design concerns when trying to incorporate emergency retract function with the Concertina product. These are:

The need to be able to create a safe environment and account for the possibility of someone being trapped inside the stair meant that emergency retract is required in this instance. Extensive meetings were held between Greene Fire, Buildcorp, Defire and NDY to outline the specific requirements of the fire curtain, fire detection and mechanical systems within the building. This was invaluable and meant that all systems were installed and commissioned together to work correctly the first time.

Red light warning strobes, located on both sides of the curtains, were incorporated to aid in notifying occupants that the fire curtains are deploying. There are also obstruction sensors which are used in conjunction with a voice warning system to notify occupants of any obstructions in the way of the curtain as well as notifying them when the curtain is dropping. 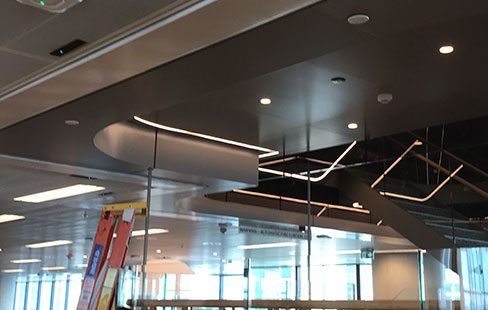 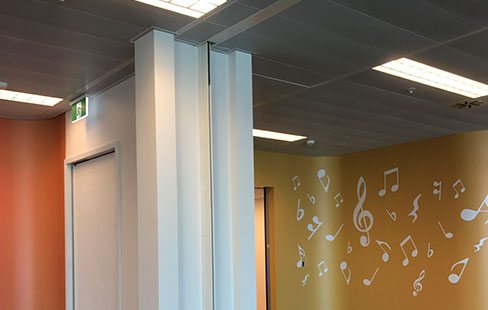 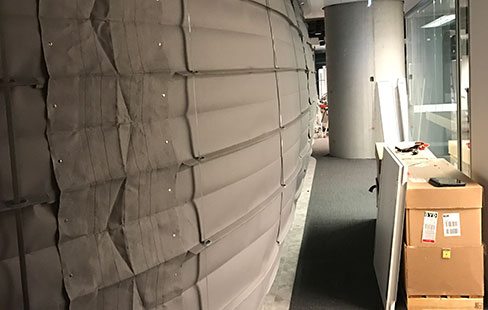 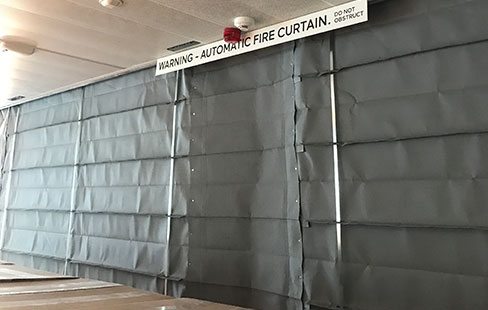 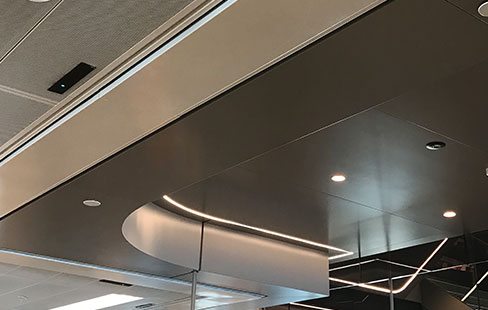 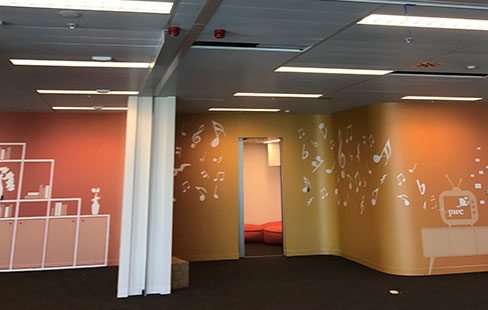