10 Shelley Street is a mixed-use development with an effective height in excess of 50m. The existing building was constructed in 2003 and comprises:

The existing building had all the service requirements expected in a building with an effective height greater than 50m including a smoke detection system, sprinkler system, zone smoke control and emergency warning and intercommunication system.

The design of the Suncorp fitout included areas which did not comply with the deemed-to-satisfy (DTS) provisions of the BCA. To combat this, a performance solution could be used to meet the relevant performance requirements of the BCA. This included the fire separation of stair voids via vertical fire curtains that achieve a fire resistance level (FRL) of -/120/-.

Level 3 and above, may connect two levels via the inter-tenancy stairways and associated.

The fire separation of the internal voids had to be continuous between the fire rated floor slabs – including the ceiling space and access floor voids. Any openings would have to be protected in accordance with clauses C3.12 and C3.15 of the BCA.

FireMaster Concertina curtains were installed around the internal stair void on Levels 4,6,8,10,12 and 14. The Fire Curtains were suspended from the ceiling and a fire rated Bulkhead Batt system was used to fire rate above the curtains, creating the continuous fire separation between the fire rated floor slabs.

Due to the limited space available between the stair voids, the only solution that would fit to still allow compliant egress provisions was the narrow Fire Master Concertina fire curtain headbox. It’s bottom tray measures only 170mm wide and is the smallest profile available. The standard bottom tray of 300mm would have been too wide for this application.

Red light warning strobes, located on both sides of the curtains, were installed and these will activate until the curtain has been fully deployed. There are also obstruction sensors which are used in conjunction with a voice warning system to notify occupants of any obstructions in the way of the curtain as well as, notifying them when the curtain is dropping.

The curtains remain in fire mode until the alarm signal is restored, at which time the curtains can be auto retracted by simply pressing a reset button on the control panel. The controls have been installed at a lower level close to each fire curtain which allows the client to perform monthly testing easily on each life saving device. The control panels have been hidden with an access panel provided so the architectural design is not compromised. 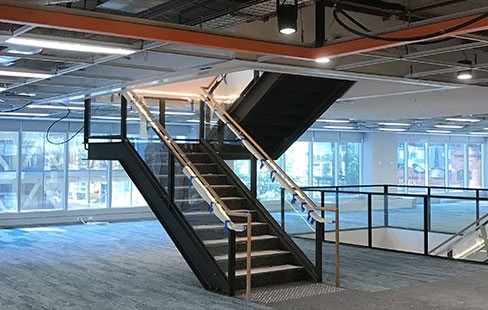 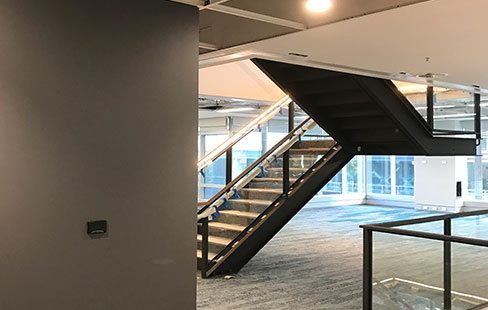 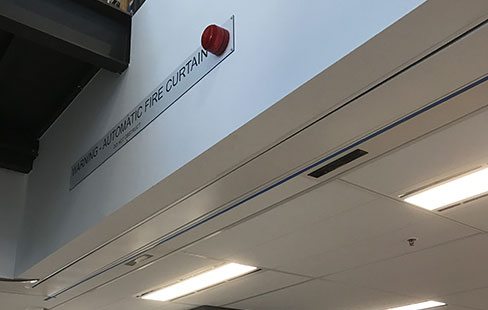 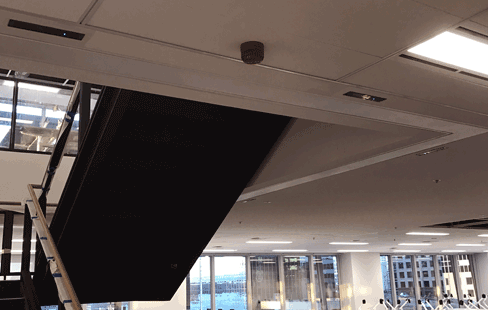 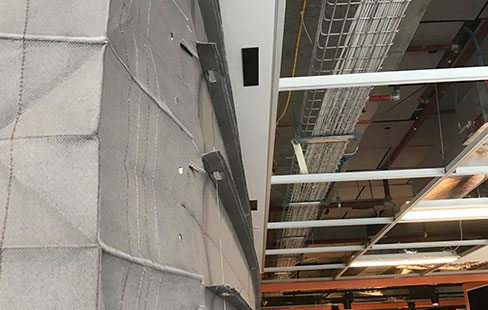 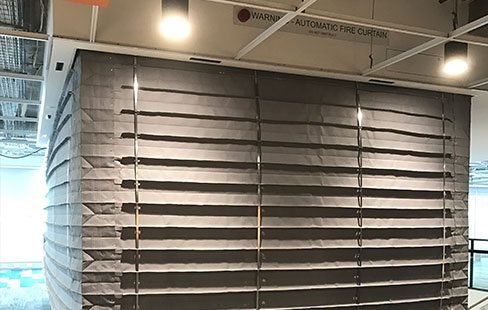